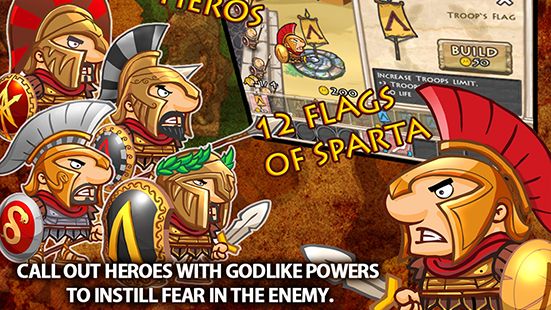 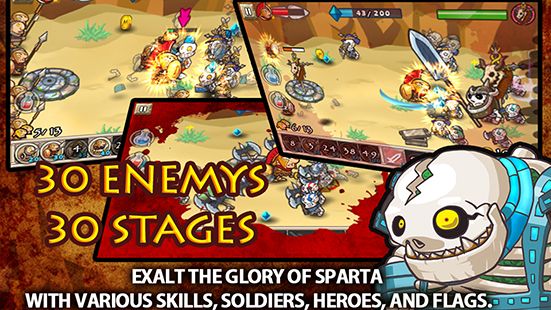 What is there to fear? We are Spartans! For the glory of Sparta!

☆ Speech by the king of Sparta!
Arexes, murderous tyrant and lord of darkness, has amassed his dark legions against Greece! It is our solemn duty to defend Greece and dispatch his minions to Hades. We will make our stand at Thermopylae, where we will engrave in eternity the bravery and name of SPARTA!

Hero Gylippus
- General who thwarted the Athenian plan to conquer Sicily. He has the ability to heal heroes and soldiers around him.

Hero Brasidas
- Hero of the War who is compared to Hercules in the Symposium by Plato. Using his tremendous Health as a weapon, he provokes enemies to attack him.

Hero Pausanias
- Spartan supreme commander for the allied powers that destroyed the Persian military. With powerful attacks and health, he significantly increases the attack power of allies by raising their morale.

HowTo Play
1) Become a Spartan champion and block the swarming dark legions.
2) Prevent the dark legions from passing through the gateway of Sparta that leads to Greece.
3) Win the battle by calling out strong soldiers with unique characteristics.
4) Use a variety of cool skills to blow away enemies swarming in.
5) Call out heroes with godlike powers to instill fear in the enemy.
6) Plant Spartan flags in the flag areas located on the battlefield. Each flag has its own useful ability and blocks the advance of enemies for a certain period of time.
7) Exalt the glory of Sparta with various skills, soldiers, heroes, and flags.

You can download the APK file only from Android Mobile.

* The country of the comment is identified by GeoIP.